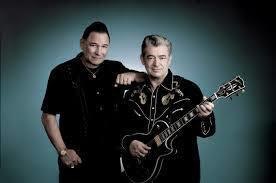 From his NYC punk rock days fronting the Tuff Darts in 1976, to his days on RCA Records, neo-rockabilly singer Robert Gordon has always had music on his mind and in his sights. Discovered by a record producet, Gordon was paired with Link Wray for his debut album and the follow up, FRESH FISH, which included the song "Fire" which Bruce Springsteen penned for Robert Gordon.  His third album paired him with Chris Spedding and Rob Stoner and gave us the hit single, "Black Slacks."

Guitarist, singer/songwriter and producer Chris Spedding has been a mainstay of the British session scene having played with Jack Bruce, John Cale, Elton John, and Paul McCartney among numerous others.  Here in the states he has played with Robert Gordon, Jerry Harrison of the Talking Heads and many more.  He has released 13 albums, including his most recent JOYLAND.