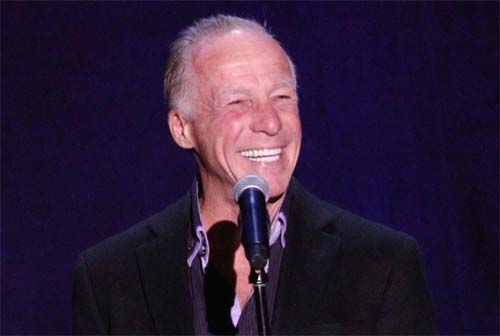 For eighteen years (1983-2001) a fixture of radio & television’s Howard Stern Show, comedian Jackie “The Joke Man” Martling was born and raised in East Norwich, a tiny hamlet on the glorious North Shore of Long Island, New York. He graduated in 1966 from Oyster Bay High School and earned a degree in Mechanical Engineering from Michigan State University in 1971.

As he was accumulating the world’s most extensive collection of jokes, Jackie toiled in the music business until abandoning it in 1979, saying farewell to his beloved trio “The Off Hour Rockers,” to give his punch lines a shot on the not-yet-existent Long Island comedy stages.

To promote Long Island’s first comedy show that he and fellow fledgling comedian Richie Minervini partnered in producing at the bar-restaurant “Cinnamon” in Huntington, Long Island, in March, 1979, he created a dirty joke line, “Use Your Finger! Dial (516) 922-WINE!,” which has been in uninterrupted operation since 1979 [516-922-9463].

In 1982, after founding “Governor’s Comedy Shop” in Levittown on Long Island and touring as a national headliner, on a suggestion from a Washington DC comedy club owner, he blindly sent his three LP’s to Howard Stern upon Howard’s arrival at WNBC-AM in New York City. Howard called him to make a guest appearance on his radio show. In 1986, Jackie became a full-time cast member and the head writer of Stern’s show, and as they say, the rest is history. Remarkable radio as well as show business history.

If you’d like to receive jokes via e-mail, you can get on The JokeLand E-Mail List by simply e-mailing Jackie:

In 2006 he released a CD of his original music entitled “Happy Endings,” that he co-produced with guitar legend Frank Vignola.


From 2007-2014, Jackie wrote and performed his own radio show on SiriusXM Satellite Radio, “Jackie’s Joke Hunt,” and he wrote the joke page for Penthouse magazine for 17 years.

Jackie is featured in the red-hot comedy documentary, “The Aristocrats,” over a dozen other independent films, and has appeared on many television shows.

He still works all around the country performing his solo act of rapid-fire filthy jokes and the classic finale, “Stump The Joke Man.” and guests on many of the top national radio shows and podcasts.