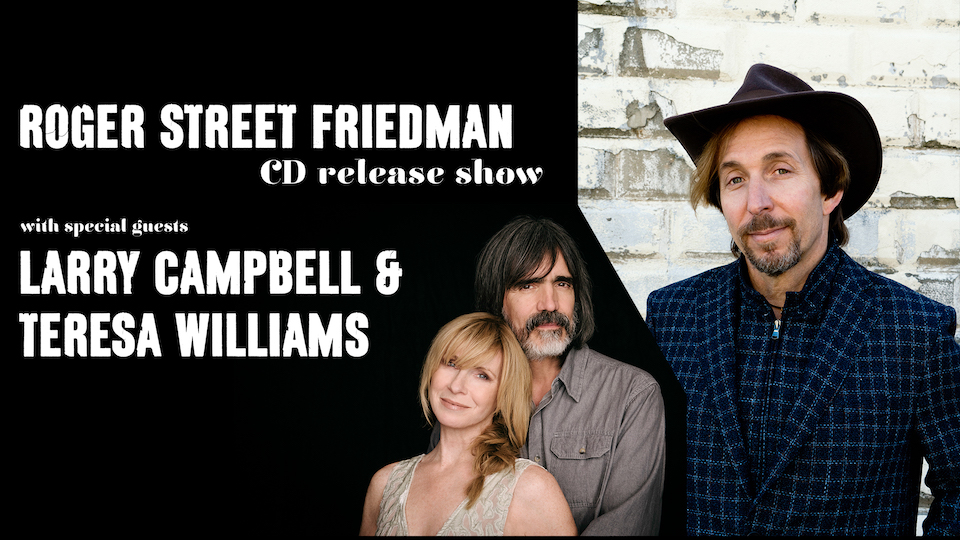 Roger Street Friedman is an award winning singer-songwriter based in Sea Cliff, NY. His critically acclaimed 2017 album Shoot The Moon reached #2 on the Roots Music Report Americana Country Album Chart. The album recalls the singer-songwriter tradition of Marc Cohn, Randy Newman, Warren Zevon, Mark Knopfler and Robbie Robertson. Roger’s live shows are infused with emotion and will make you laugh and maybe even shed a happy tear—and this one will be no exception! The show celebrates the release of Roger's third full-length album, Rise, produced by the Grammy-winning Larry Campbell (known for his work with Bob Dylan, Levon Helm, David Bromberg, Hot Tuna and more) and includes performances by Campbell and his musical partner, singer-guitarist Teresa Williams. It also happens to be Roger’s birthday week!

Acclaimed Americana musicians Larry Campbell and Teresa Williams are a powerhouse of vocal and instrumental virtuosity. Their performing partnership was molded during ten years of recording and touring with Levon Helm, iconic drummer and voice of The Band. The couple’s two albums, 2015’s Larry Campbell and Teresa Williams and 2017’s Contraband Love opened doors and ears as they toured with Jackson Browne, Little Feat, Emmylou Harris, Hot Tuna and John Prine. Mojo dubbed the pair “The first couple of Americana,” and American Songwriter wrote: "Larry and Teresa have created a unique sound inspired by the past, that is spirited, stirring and timeless." Joining them are longtime bassist/vocalist Jesse Murphy (Norah Jones, Brazilian Girls) plus drummer and Grammy-winning engineer Justin Guip.